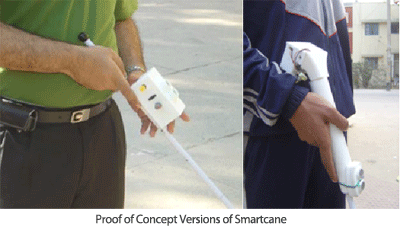 Smartcane was conceptualized in May 2005. The first laboratory version of the product was demonstrated in 2006. Subsequent developments led to realization of first functional prototype of the product in 2007 with some improved mechanical features. Initial versions were all fabricated using rapid prototyping process after CAD modeling. Proof of concept user trials were carried out at National Association for Blind (NAB).

Subsequent developments of smartcane happened working jointly with a team from Phoenix Medical Systems, Chennai. First time usability issues were addressed in these versions. Improved mounting of smart cane on white cane was addressed during this period. Some of the universal design principles too were incorporated in these versions.

Major developments of Smarcane happened when Wellcome Trust decided to support this cause through one of their schemes Affordable Healthcare in India. During this phase translational phase product was optimized for weight, size, ergonomics, electronics packaging, improving usability, reliability and maintainability of the product. Manufacturing and assembly issues too were addressed. To satisfy these requirements, multiple versions of smartcane designs were explored.

Extensive multi-locations user feedback revealed many new requirements which helped in refining the product. Some of these requirements came as further reduction in weight, improved power management, improved sensor angle adjustment mechanism, reliable attachment mechanism with whitecane, Braille indications for various functions, aesthetics.
To assess grip ergonomics it was experimented with a large group of users and for different types of grips. The methodology adopted here consisted of identifying areas of strain with different grips in order to arrive at common areas of strain for all types of grips. This work was carried out with help of industrial designers from Yuga Designs, Chennai. This work was further supported with different clay models of user grips at trails sights consisting of people from all age groups. Some of these trials were conducted at NIVH (National Institute for Visually Handicapped) Chennai. 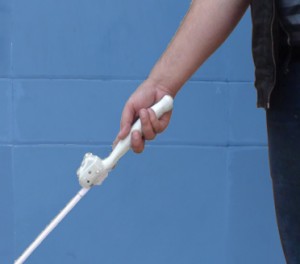